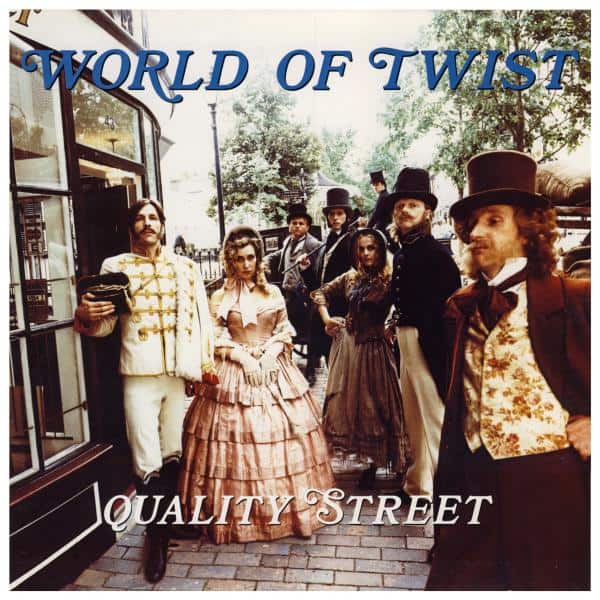 World Of Twist were the Roxy Music of their time, I can’t think, or give a better compliment than that – Jeremy Deller

Quality Street is available on vinyl again after many years.  The heavyweight 180gsm vinyl now includes She's A Rainbow (not included on the original vinyl release) as well as the singles The Storm, Sweets and Sons Of The Stage.

World Of Twist were something of a live sensation in Manchester, in part a consequence of their Heath Robinson stage sets which involved a lot of things which went round and round, including a hypnotists wheel, revolving mirrored barbers poles and spinning cut-out heads of band members.

After selling out the 1,500 capacity Manchester Ritz on December 23rd 1990, a gig fondly remembered by the Gallagher brothers of Oasis, they recorded the album in the summer of 1991. Having mixed the record at Peter Gabriel's Real World Studios in Wiltshire, where Nick would ask a bemused Gabriel to borrow his old Genesis masks for a photo shoot, the band would later spend a day in Tunbridge Wells trying to recreate the illustration on the front of the Quality Street tin for the album sleeve.

Their time following the album release was short lived and it wasn’t long before the band drifted apart, as Tony Ogden remarked; “We spent £250,000 making an album with the smallest bollocks in pop history. The band just fell apart. We were smoking marijuana for breakfast and that led to communication problems. I didn’t want to sing, the guitarist didn’t want to play. When the company didn’t get a hit they threw us in the bin. I was devastated – I spent four years on smack watching Third Reich movies because the good guys always win. I’m really sorry for letting our fans down. But I’d ask anyone to play that World of Twist album 20 times with every dial full on. If it doesn’t rock, come and smash it over my head.”